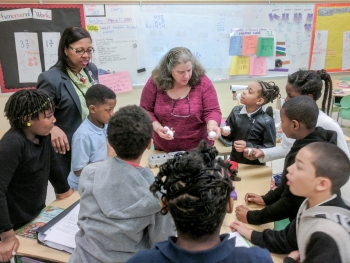 Students at Miner Elementary (601 15th St. NE) got a special delivery on March 22 –boxes and boxes of books to kick off Literacy Week for the school. Thanks to a donation from Companies for Causes (CforC), a philanthropy-focused organization of corporations, the students will receive four to five classroom library collections worth of books to contribute to improving literacy in the District’s public schools. CforC bought the books from Science Naturally (725 Eighth St. SE), using about $1,200 raised during a “Books for Kids” campaign in the spring of 2016 on Capitol Hill.

In DC, the quality and availability of books varies considerably from school to school, said Joe Weedon, Ward 6 State Board of Education representative and a CforC member. CforC wants to change that starting in Ward 6 schools. “Many of the schools do a good job of providing support, but I think we can do things on a bigger scale and looking across communities,” Weedon said.

CforC chose Miner for its latest donation because of the school’s relationship with Eastern High School (1700 East Capitol St.) and its low Partnership for Assessment of Readiness for College and Career (PARCC) scores in 2015 and 2016. Only 9 percent and 10.1 percent of Miner students met or exceeded standards for English language and arts and literacy skills in 2015 and 2016, respectively.

Eastern High re-launched its program in 2011 after a significant overhaul. At the time, CforC founder Tom Raffa wanted to find a strong cause for his young organization to work with in order to show corporate investors the impact of donating to and investing in societal issues. “I spent a lot of time advising bigger companies, and I’d be fairly unsuccessful,” Raffa said. “Even if the CEO got excited about the concept I was selling, it wouldn’t push through.”

Deciding to target visible concerns in Ward 6, he reached out to Eastern and then-Principal Rachel Skerritt to find out what needs she saw in her own students. His idea: give the schools what they actually need, not what corporate CEOs think they need.

“We wanted to be the guys that were helpful,” Raffa said. “We didn’t want to be a foundation that says: ‘We love this concept and we want you to do this.’”

Skerritt told Raffa that the school needed books for the “Drop Everything and Read” program. Raffa got 6,000 books for the high school from donations totaling about $10,000, and delivered them. But Raffa realized that though CforC could replace depleted book stocks at the school, it wouldn’t change the underlying issue. Students were still arriving at the high school level with inadequate reading skills.

Raffa described it as like pulling babies out of a river. “We have to go up the river and figure out who is throwing these babies in the river and stop that,” he said. “It’s not just fixing symptoms, but solving the starting problem.”

Turning the Focus on Elementary Schools

Miner scored one of the lowest averages for school literacy in the 2015 and 2016 PARCC scores calculated by the DC Public Schools (DCPS). David Treat, president of the Miner Parent Teacher Organization (PTO), said the school hired a reading resource specialist at the start of the 2016-17 year to help improve proficiency. He said the CforC’s investment in the school with the book donation dovetails with the school’s priority for this issue. “Any investment of literacy resources is greatly appreciated by our community and can certainly be beneficial in boosting the reading proficiency of our students,” Treat said.

Ward 6 Councilmember Charles Allen has also pushed the District’s investment in early childhood literacy with his now year-old Books from Birth program. In order for high school students to improve their preparedness for college and careers, they need to start that development at a young age. He said he appreciates CforC’s ongoing commitment to Ward 6 students’ literacy but regrets that it takes private investments to bring public schools up to standard. “It will definitely help students and their access to books, technology, and literacy,” Allen said. “It is one of my biggest frustrations to walk into schools and see libraries with empty shelves.”

Raffa remains wary of spreading the CforC focus too thin across the District. He wants to ensure that the investments they make impact those schools as effectively as possible and when needed. But CforC would also like to expand this model of promoting literacy to other schools.

Weedon said that following the fundraising campaign for Miner’s books and the relationship fostered with Eastern, he hopes to launch a new campaign for donations in fall 2017 to buy collections in spring 2018. “One of the priorities that Eastern has always pushed forward to us – under Skerritt and now Principal Sah Brown – is the importance of reading,” Weedon said. “We want these students to have had this rich exposure to literature from day one.”

Please check your e-mail for a link to activate your account.
Get Involved Donate About Us
Subscribe with RSS